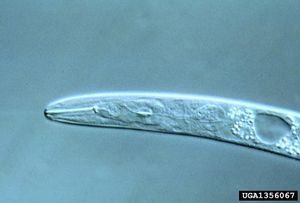 This genus includes around 50 species of endoparasitic cyst nematodes. Only the second stage larvae (J2) and the males can actively migrate. The J2s are vermiform, 300-500 µm long and have a large stylet. They penetrate plant root cells, feed on their content and migrate within the root. They finally settle and form a permanent feeding site (syncytium) by destroying and dissolving the surrounding cell walls. Females swell and form cysts when they die, containing several hundred eggs. The cysts are about ½ mm in diameter. Males form a smaller syncytium.

Economically, the most important species of Heterodera are: