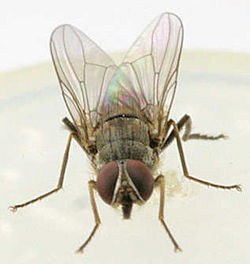 This species is a serious, blood-sucking pest of cattle which has spread from Europe to North America at the end of the 19th century. It has subsequently invaded Central and South America and was first recorded in Argentina in 1991. Occasionally, it feeds on other domestic animals and even humans. H. irritans often attacks cattle in large numbers (e.g. more than one thousand per animal), causing considerable stress and weight reductions, as well as damage to the hides. The economic damage has been estimated at around US$ 1 billion in North America in 1998, which includes production losses and treatment costs.

Aggregations around the horns of the cattle are actually not very common. The flies tend to concentrate more on the back during cool and on the stomach during hot conditions. H. irritans is a strong flier and can cover more than 10 km to find a host. It breeds in fresh cow dung. The development from egg to mature adult lasts around 2-3 weeks and there are up to 4 generations per year. The pupae of the last generation overwinter in the soil, under the dung. For management, insecticide-impregnated ear tags are commonly used. Pour-on and feed-through insecticides are also available for controlling the flies on the skin and the dung respectively. However, pesticide resistance has been reported from some populations. Infestations of more than 50 flies per dairy cow and 200 flies per beef cow are considered economical significant, requiring control.

The adult is 3-5 mm long, dark grey with some darker dorsal stripes on the thorax. Compared to the stable fly (another important blood-sucking livestock pest), H. irritans is smaller, has longer maxillary palpi and no clear pattern on the dorsal side of the abdomen.