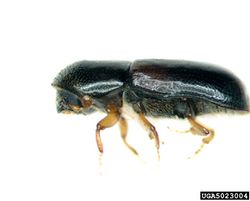 This ambrosia beetle is native to North and Central America. It has been introduced into Europe (first record in France in 1933). Mainly conifer trees are attacked. Like Gnathotrichus sulcatus and G. retusus, it is regarded as an important timber pest in North America and is of quarantine concern to countries importing wood from North America. The adults are around 2½-3 mm long and dark reddish brown to black.