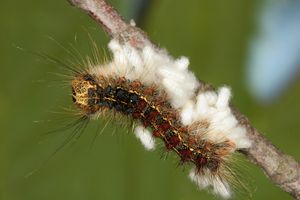 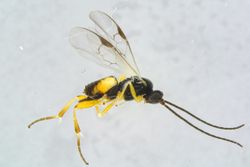 This wasp is a gregarious endoparasitoid of the gypsy moth (Lymantria dispar). It is common in Europe and also found in Asia. Laboratory studies have been done in Canada, but the species has not been released there.

Females lay around 20-30 eggs into young to mid-stage gypsy moth larvae. Development of the host continues and parasitoid larvae are mature after 2-3 weeks. By that time, the parasitoids leave the host and spin cocoons on the outside. The host larva dies a few days later.