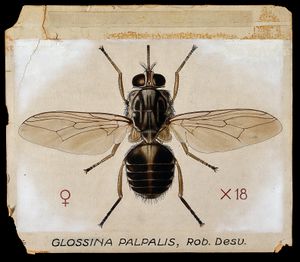 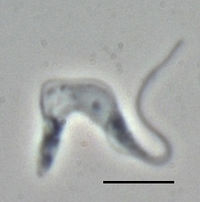 The tsetse fly is an important vector of the West African form of human sleeping sickness (Trypanosoma brucei gambiense) and of nagana disease in animals (Trypanosoma brucei brucei). It is found mainly in coastal regions of tropical West Africa and is adapted to the human environment as well as to tropical rain forests. Field infection rates by the Trypanosoma parasite can reach 10% in the fly population. However, many infected flies fail to produce mature parasites in their salivary glands and can never transmit the disease.

The blood-sucking adults are around 12 mm long with a forward pointed proboscis. They feed on humans and other mammals like cattle. The larvae develop singly inside the female which deposits a mature 3rd instar larva in sandy soils a few hours before they pupate. Spraying of pesticides has been the traditional control method. However, the use of traps and targets impregnated with insecticide is a new promising approach. Further, the release of sterile males (SIT technique) is under investigation.