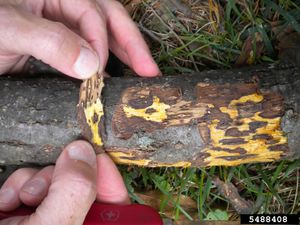 The fungus causes cankers on black walnut (Juglans nigra) leading to death of the trees. Other Juglans species may also become infected.

The thousand cankers disease has affected walnut trees in North America since the mid 1990s and is vectored by the walnut twig beetle, Pityophthorus juglandis. The fungus is a symbiont of the beetle and both are needed to initiate the disease. Since 2013, both the fungus and the beetle vector have been recorded from Italy.