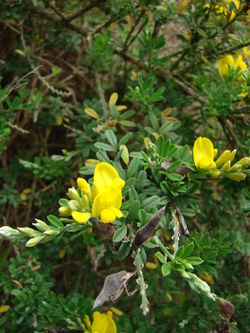 This shrub is native to the Mediterranean region and has been introduced into western North America as an ornamental in the mid-1800s, subsequently also into parts of South America, Australia and New Zealand. The plant grows to a height of around 3 m and is evergreen. Stems and pods are densely covered with silvery hairs. The flowers are pea-like and yellow.

French broom invades grasslands, degraded forests and disturbed areas. Pastures can become unsuitable for livestock. In addition, the weed suppresses native vegetation. Large seed banks, up to 8,000 seeds per m2 can be accumulated. In the invaded countries research is in progress on possible biological control agents which could be introduced.