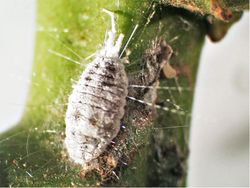 This mealybug is native to the neotropical region, but has spread around the world. It is polyphagous and attacks a large variety of crops. In addition, it is a vector of the Cacao swollen shoot virus in Africa. The body is grayish, elongated with two uneven, longitudinal stripes, consisting of dark spots, on the dorsum (under the wax cover). The caudal wax filaments are about half as long as the body.