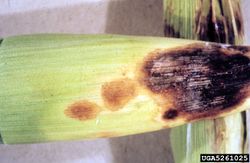 Exserohilum turcicum symptoms on a maize ear (click on image to enlarge it)
Source: Florida Department of Agriculture and Consumer Services - IPM Images

The fungus is widely distributed around the world in temperate maize-growing regions and causes northern corn leaf blight. It also infects sorghum and related species. Yield losses of around 20% are common in maize under conditions of high humidity and moderate temperatures. With severe infestations, they can reach 70%.

About 1 week of the infection by the fungus, elongated tan streaks appear on the leaves. These lesions enlarge, reach a length of 5-10 cm, often join and typically become dark brown and cigar-shaped. Dark spores develop on the surface under humid conditions. The Fungus can persist in the field and overwinters on plant debris. Management options include tillage to remove plant residues, crop rotation, partly resistant cultivars and fungicides.