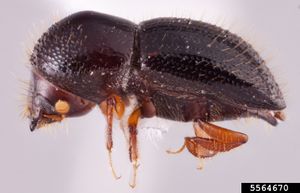 This invasive ambrosia beetle is native to southern parts of Asia from Sri Lanka to southern China and southern Japan. It was first recorded from Hawaii (first record in 1976) and later spread to Louisiana (U.S.) and other parts of southern North America as well as to South America (Cognato et al., 2015). It is polyphagous and uses dead and dying trees of various families for breeding. The adult beetles are larger (around 3½-4 mm) compared to the Euwallacea fornicatus species group, however they are very similar in size and morphology to Euwallacea validus.