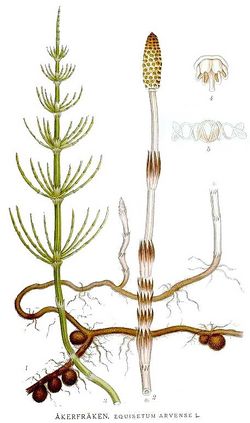 This plant is a perennial weed in temperate regions which is characterised by extensive, deep rhizomes that produce new sprouts. It can become a persistent agricultural weed once it has established in a field. In grasslands, it is toxic to livestock.

The plant usually grows to a height of 40-50 cm, with segmented branches and small, scale-like leaves. The rhizomes can be found more than 1 m deep and form small tubers. They are widely branched, overwinter, and produce new shoots in spring. Fertile stems are light brown, unbranched and produce abundant spores. Sterile (vegetative) stems emerge later, are green with whorls of thin branches.