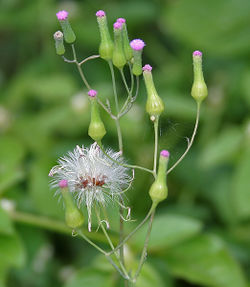 This herbaceous weed is believed to be native to southern Asia, but is now widely distributed in tropical and subtropical regions. In some countries it is used as a medicinal plant or as food. However, more commonly, it is regarded as an unwanted weed, affecting various agricultural crops or invading disturbed habitats. Significant yield reductions have been reported in some areas and crops.

The plant grows to a height of more than 50 cm. The oval leaves have a coarsely toothed margin. Typically the inflorescences are red, but may be also be pink, orange or white.