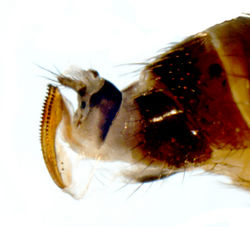 This genus of flies contains more than 3,000 species and has a world-wide distribution. They usually breed in over-ripe or rotting fruits. However, Drosophila suzukii is able to breed in nearly ripe and ripe fruits due to the ovipositor having a structure similar to a saw which can penetrate the fruit skin. It has become a serious invasive pest in many countries. Other species are mainly regarded as nuisance pests when they assemble in high numbers around rotting fruits and vegetables.

Some species can complete their larval development in about a week. The adults are typically 3-4 mm long, yellowish to brownish with red eyes. Some species have darker markings on the thorax and wings.