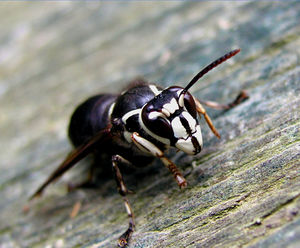 This is a large species of wasp found in North America with the queen reaching a length of up to 20 mm and their nests a length of up to 60 cm. It can be easily recognized by its size and the black and white markings. The colonies contain several hundred workers. A new conical paper nest is constructed every year.

They aggressively defend their nest against possible predators (mainly skunks and raccoons) and will also attack humans coming close to their nest. Stings cause swellings for about a day. Attacks are triggered by the release of a defense pheromone (Jimenez et al. 2016).