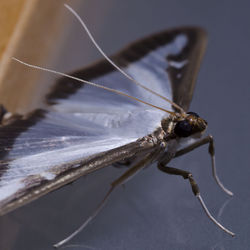 The moth is native to eastern Asia and has been accidentally introduced into Europe (first record from Switzerland and Germany in 2007). It has spread rapidly over many parts of Europe (see Nacambo et al., 2014) and became a serious pest of wild and ornamental Buxus plants. Infestations are often associated with the box blight disease (Calonectria pseudonaviculata). Several other plants are also attacked.

The caterpillars feed on the leaves and often cause defoliation and death of the trees. Between 2010 and 2012 the moth caused great destruction to native box trees (Buxus sempervirens) in German and Swiss forests around the city of Basel. Since ornamental box trees are frequently sold and transported across Europe there have been few boundaries to its dispersal. A recent climatic study concluded that most parts of Europe are suitable for the moth.

The caterpillars grow up to a length of about 5 cm. The adults have a wingspan of 4-4½ cm and are mostly white with brown bands on the edges of the wings. Nearly all brown forms also exist. The life-cycle from egg, over 7 larval stages, to mature adult lasts around 6 weeks. There are usually 2-3 generations per year. The last generation overwinters as larvae.