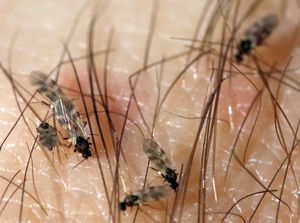 This biting midge is found in Europe and northern (mainly western) parts of Asia. It has a broad host range which includes wildlife, livestock and humans. In some areas (e.g. parts of Scotland) it is a serious pest of humans during the summer months.

Outbreaks of the midge are common if abundant breeding grounds are in the vicinity. These are marshes and bogs rich in organic matter. The adult midges assemble in clouds and attack humans in large groups, affecting tourism and forest operations. In some areas and under certain environmental conditions, humans need to be protected from the midges with head nets like beekeepers.

Females can produce one batch of eggs prior to their first blood meal which contributes to populations reaching high densities. The species can also become infected by the bluetongue virus under laboratory conditions and might become a vector of that virus.