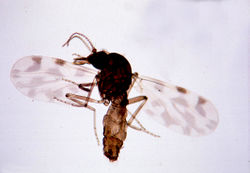 This midge is found in tropical and subtropical parts of Africa. Since the 1970s it has been recorded from the Mediterranean region. It feeds on a range of large mammals, including humans. Common hosts are sheep, cattle and horses. C. imicola is the main vector of the African horse sickness virus (AHSV) and bluetongue disease of ruminants.

The economic losses of the Bluetongue virus alone have been estimated at 3 billion US$ per year (1989). However, the spread of the bluetongue disease across northern Europe in 2006/2008 has demonstrated that C. imicola is not the only vector of that virus. For AHSV, even a 0.003% infection rate in C. imicola can cause disease outbreaks. The low infection rate is compensated by the abundance of the vector. Near horses, more than 1 million C. imicola adults can be collected in a single light trap during one night.