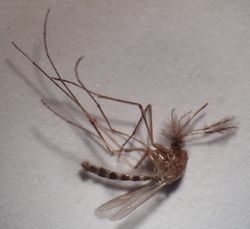 This mosquito species is common in many parts of Asia and is also found in the Near East and in Africa. It breeds mainly in rice fields, but also in marshes, swamps and other stagnant water bodies. The breeding sites are typically exposed to sunlight, have clean water and contain vegetation. C. tritaeniorhynchus feeds on domestic animals and humans, also on birds. It bites during the night and is the primary vector of Japanese encephalitis in Asia. Further it can transmit a number of other viruses as well as microfilariae (Brugia malayi and Wuchereria bancrofti).

Populations in rice fields can reach high levels and during peak breeding periods, it can produce up to 100 adults per m2 per day. The development from egg to adult depends on the temperature and can be as short as 1-2 weeks under favorable conditions. In cooler regions it migrates in the autumn to dense vegetation where it overwinters as hibernating adult. C. tritaeniorhynchus is closely related to Culex vishnui, with predominant brownish colouration and without easy to recognize characters. The apical tip of the hind femur has a narrow dark ring and the proboscis has some lighter patches on the ventral surface near its base (apart from marks in its apical half).