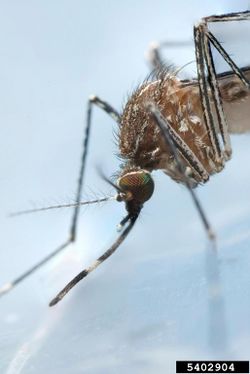 This mosquito species is an important vector of arboviruses (western equine encephalomyelitis, St. Louis encephalitis) and the West Nile virus in North America, particular in western States. It feeds on a variety of hosts, but more often on birds than on mammals and rarely on humans. In a recent study on > 500 specimens from California, about 70% had fed on birds and < 30% on mammals (mainly on cattle) and only 1 on a human, while 12% were positive for the West Nile virus (Campbell et al. 2013). C. tarsalis bites just after sunset and breeds in any type of standing fresh water which is exposed to the sun, from discarded containers to ponds. It might be found together with several other Culex species.

The life cycle lasts for 1-4 weeks depending on the temperature and other factors. The adult is 5-6 mm long and has a complete white ring on the proboscis (see image on the right). The forefemur and tibia have white anterior spots and the abdominal sterna inverted, V-shaped dark marks (see image below).