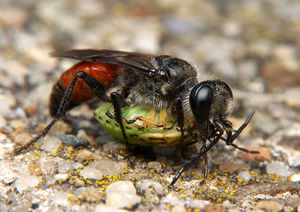 The family Crabronidae contains around 9,000 species of solitary wasps, many of which have been previously classified under the family Sphecidae. They are mostly predators and parasitoids which hunt other insects, paralyse them and lay an egg on the prey which serves as food for the hatching larva. The adults visit flowers and feed on nectar. Some species are regarded as useful beneficial insects that prey on pest insects. For example Larra bicolor is a predator of mole crickets and has been introduced into North America against mole crickets of the genus Neoscapteriscus.

The following genera and species are currently entered under this family: