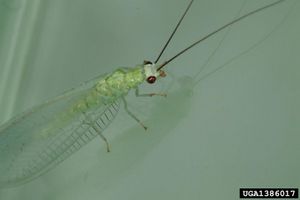 This genus of lacewings is widely distributed and includes several important biological control agents which are commercially produced and used for the management of agricultural pests. They are mainly sold as eggs. These are either formulated for being spread on the affected crop or mounted on cards which can be hung on the plants. The larvae prey on small insects like sucking insects or Lepidoptera larvae, while the adults visit flowers and feed on pollen and honeydew.

Members of Chrysoperla can be recognized by their wing venation, colour patterns and other features. However, the genera of the family of Chrysopidae are not easy to separate and the placement of some species is not clear. Similarly, species within the genus Chrysoperla are difficult to identify and there are many cryptic species. These are morphologically extremely similar, but differ mainly in the courtship songs which males and females produce to attract each other. Thus, the common green lacewing, Chrysoperla carnea, offered commercially as a biocontrol product might often be a different species.