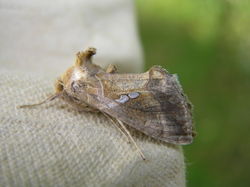 This species is a medium-size moth (wingspan around 35-40 mm) which is widely distributed and a serious pest of various greenhouse crops in temperate regions as well as of field crops in warmer regions. It is polyphagous and apart from tomatoes, crops like bananas or cotton are attacked. It often defoliates the host plant or damages the fruits like in the case of bananas. The caterpillars are green while the moths are mainly reddish brown to golden brown with a white mark on the forewings, resembling 2 drops.