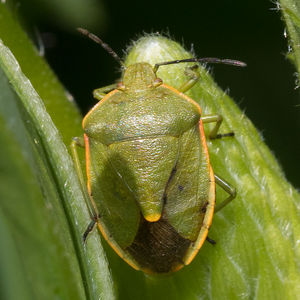 This genus of plant bugs includes around 20 species which are found mainly in temperate regions of the northern hemisphere. In North America, several species have been reported to cause economic damage to crops like alfalfa, wheat or cotton. They feed on developing seeds and fruits or on buds, less often on stems and leaves.

The adults are typically 10-15 mm long, often green and with a light or yellowish margin around the body, as well as a lighter spot at the tip of the scutellum. The general colour may also be brown or almost black with a reddish outer margin.