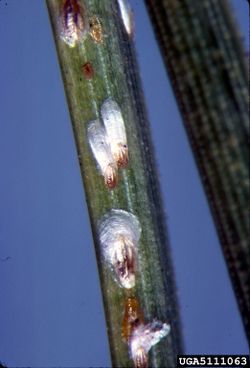 This genus of armored scale insects is widely distributed, with many species found, for example, in temperate parts of Asia. Chionaspis includes between 60 and 100 species of mostly elongated scales. The morphology is similar to those of the genus Aulacaspis. While some species are polyphagous, others are confined to one or a few host plants. Several species are regarded as harmful pests like Chionaspis pinifoliae which attacks pine trees and other conifers in North America.