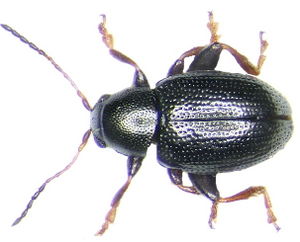 This genus of flea beetles is widely distributed and contains more than 400 species. They inhabit grasslands and other environments and often prefer moist conditions. They feed and breed on plants from a number of different families like the Amaranthaceae, Cyperaceae and Poaceae. Several are considered agricultural pests like the corn flea beetle, Chaetocnema pulicaria which is mainly a pest of maize in North America. The adults are small (1-3 mm long) and jump when disturbed.