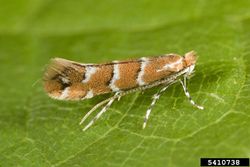 The leafminer was recorded in 1984 in Macedonia for the first time, when it was described as a new species. However, studies of larval DNA from herbarium specimens indicated that outbreaks have occurred in the region as early as 1961 and that this insect had been already collected in Greece in 1879. Therefore, the southern Balkans appears to be the origin of this species. Starting with the late 1980s the moth spread rapidly through most parts of Europe (see illustration below), causing serious outbreaks on horse-chestnut trees. An average dispersal rate of around 60 km per year has been estimated during that expansion phase. However, the mechanism of spread has not been clarified, with wind and vehicles being cited most often as possibilities.

Although the damage inflicted by the moth has been often very severe and caused stunting as well as a reduction in seed production, it has not been associated with tree deaths. Apart from horse-chestnut (Aesculus), some attacks on true chestnuts (Castanea) and maple trees (Acer) have been also reported. Removing and burning the fallen leaves in autumn is recommended as a control method in urban areas.

After hatching from the eggs, the larvae enter the leaves. Initially, the mines are approximately circular and later show some extensions and arms. The larvae develop through 4-5 feeding instars and 2 spinning instars. In the summer the total life cycle can be completed in less than 2 months and there are 2-4 generations per year. The pupae overwinter on the ground, inside of fallen leaves and are resistant to low temperatures. The adult moth is about 5 mm long and has a distinct dark reddish-brown to orange-brown colouration. The forewings have a basal longitudinal white stripe as well as 4 white cross bands, each with a black border. The legs are whitish with black bands.