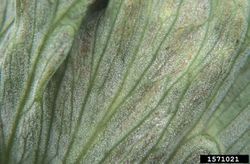 The oomycete causes downy mildew on lettuce which can be an important disease in temperate regions. The symptoms consist of angular, greenish lesions (limited by large veins) which become yellow or necrotic.

B. lactucae also infects various other plants, including crops like artichoke and ornamentals. Management involves mainly the use of fungicides as well as resistant cultivars. However, resistance has often been short-lived.

All growth stages of lettuce are susceptible. B. lactucae enters the plant through an epidermal cell and the mycelium grows between the cells of the mesophyll, obtaining nutrients through haustoria. Asexual conidia are formed mainly on the lower leaf surface and disperse through the wind. In addition, sexual oospores are produced that overwinter in the soil and are apparently the primary inoculum in the next season.