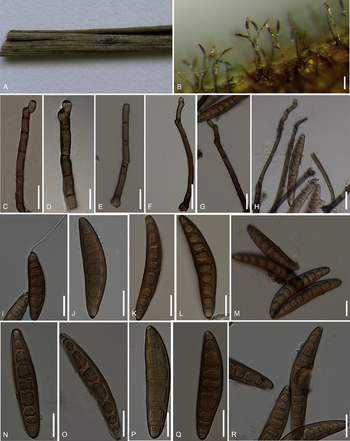 The fungus is found in tropical and subtropical regions, sometimes also in temperate countries. It infects a large variety of host plants, e.g. lawn grass and graminaceous crops, resulting in diseases like damping off in pearl millet. Host plants outside the Poaceae include cassava, coconut palms and rubber.

The conidiophores are brown, septate, around 15-200 µm long, and straight or slightly bent. The conidia have 4-10 septae and are usually slightly curved and spindle-shaped with a slightly protuberant hilum. The size is about 40-100 x 10-15 µm.