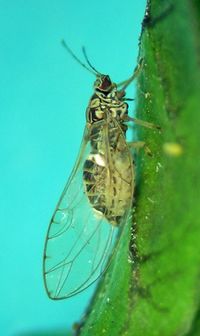 The psyllid breeds on the leaves of crops in the family Solanaceae like potato, tomato and eggplants. The foliar symptoms of infested plants include chlorosis, swollen internodes, browning of the vascular tissues, leaf curling or scorching, as well as early senescence. High populations result in yield losses of 50% or more. It is native in western parts of North and Central America. It has been recorded from New Zealand since 2006, where it was probably introduced with planting materials.

The species is further an important vector of the zebra chip disease which is causing millions of dollars in losses to the potato industry in North America. The disease is transmitted in a propagative, circulative, and persistent manner after a two-week incubation period (Sengoda et al., 2014).

During the winter it lives in warmer regions and migrates by wind in the summer to more temperate areas. These migration can cover hundreds of kilometers and the psyllid has been collected by airplane at an altitude of 1200 m. Insecticides are used for management, but pesticide resistance has developed in some areas.

The life cycle from egg, through 5 nymphal stages to mature adult lasts about 3-4 weeks. Several generations develop within one year. The adult is about 2½ mm long (including wings), greenish to brown-black with a characteristic pattern of white lines on head and thorax (see illustrations below).

For a review of this pest with emphasis on the Pacific Northwest of the U.S. see Horton et al. (2015).