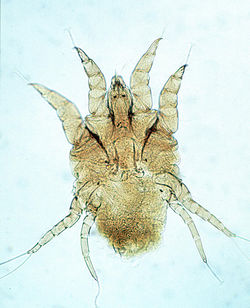 This group of small mites (often less than 1 mm large) contains important ectoparasites of vertebrates, including humans and domestic animals. Other species are storage pests, plant parasites or beneficial predators (see below).

Like indicated by the name of the group they lack any stigmata (spiracles). They have 8 legs and are weakly sclerotized. They also lack tracheae and respiration occurs directly through their cuticle. The development includes the egg, protonymph, deutonymph and tritonymph stages.

Note:
This page deals only with ectoparasites of vertebrates. For other groups see:

The following families of are currently included under Astigmata (parasitic mites):