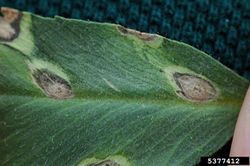 The fungus is widespread and causes chickpea blight, perhaps the most important disease of that crop. Other legumes (e.g. cowpea or beans) also become infected occasionally. Under conditions of cool and wet weather, yield losses have been reported to exceed 50% in Western Canada, even with tolerant cultivars. In 1973, the pathogen was first reported from southern Australia. Eradication attempts failed and the infestations have almost led to a collapse of the chickpea industry in that part of the country.

Sources of the initial inoculum are infected seeds or airborne ascospores, originating from infected crop residues. The infections start as elongated, sunken, dark lesions. These develop black pycnidia, often in a target pattern. Lesions on stems and branches often cause the apical parts of the plant to die off. Infections quickly spread to neighbouring plants through airborne conidia and result in patches of diseased plants.

Infected seeds are often symptomless, contributing to the spread of the disease. During the winter, the sexual stage develops on infected crop residues which produce pseudothecia. These release ascospores under suitable conditions during spring which then spread to healthy plants via rains splashes or wind. Ascospores can be blown over a distance of several kilometres.

A. rabiei is heterothallic and requires both mating types for sexual reproduction. Control options include the use of disease-free seeds, fungicides and resistant cultivars. After an outbreak, crop residues should be removed by tillage and chickpeas should not be grown in the same field for 3-4 years.

Pycnidia are round and conidia are elliptical and approximately 9 x 4 µm large, with no or 1 septum. Perithecia are dark brown to black, spherical and about 100-200 µm large. Ascospores often have a foot-print shape and consist of a small and a larger cell. They are approximately 15 x 7 µm large.