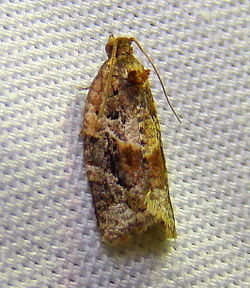 This leafroller moth is found in eastern parts of North America, where it attacks apple, other crops and a large variety of other plants. The larvae feed on the leaves or fruits, protected by webbing, and eventually pupate on the ground among fallen leaves.

There are 2 generations per year and the 2nd generation overwinters as pupae. The pest can be monitored and if necessary controlled by pheromones.