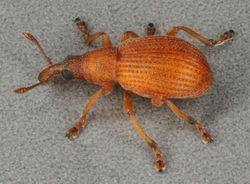 A large number of weevils have been described under the genus Apion. Many of them have been transferred to other genera. The species listed below are minor crop pests in various regions. They are only a few mm long and often breed in the developing seeds of their host plants. Apion and related genera are characterised by their pear-shaped body with a narrow pronotum and straight (not elbowed) antennae.