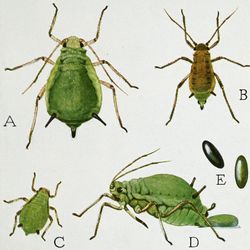 The aphid is an important pest of apple, pear and quince, widely distributed in apple-growing countries. Other plants from the family Rosaceae can also become infested. Large colonies can develop on the young shoots, that can result in extensive honey dew production, leaf curling and growth reduction.

During the summer the aphid propagates parthenogenetically, usually with wingless females giving birth to live young nymphs. However, winged forms develop periodically that disperse and start new colonies on other trees. A. pomi does not migrate to a winter host and the last generation lays black, cold-resistant eggs on the bark that overwinter.

Wingless females are green and around 2 mm long. The head, antennae and legs are mostly pale brown, the cornicles are black. Winged forms are dark, greenish to black.