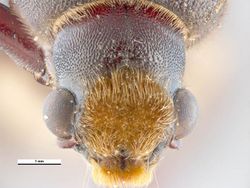 The genus Apate contains around 30-40 species of elongated beetles that are found mainly in Africa. They breed in trunks and branches of trees, mainly in dead or dying trees. However, some species can also attack living trees. For example, Apate monachus attacks fruit trees in the Mediterranean region.