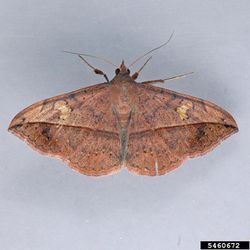 The moth is an important pest of soybean in the Americas which can cause extensive defoliation. It might also feed on other legumes like groundnuts. The species overwinters in the American tropics and subtropics, but can migrate to more temperate regions during the summer. In several areas it is considered the most important insect pest on soybean. The development from egg, through 6 larval stages, to mature adult lasts around 4-6 weeks, but varies considerably with temperature.

Early planting can reduce the damage. Apart from insecticides, biological control, like the Anticarsia gemmatalis nuclear polyhedrosis virus has been used on a large scale in parts of South America.

The adults have a wingspan of 30-40 mm. The wings are yellowish-brown to dark brown, sometimes grayish, with darker marks. There is a conspicuous transverse line across both wings which is usually dark. The colouration of the larvae also varies and can be greenish to different shades of brown, to dark brown, usually with longitudinal lighter stripes.