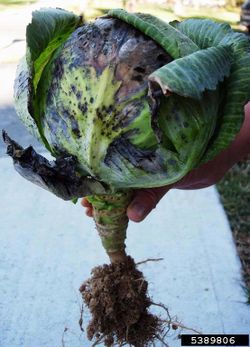 The fungus is widely distributed and causes serious leaf and pod diseases on Brassica species. The fungus enters the plant through small wounds or stomata. It may also be seedborne. The first signs are brown to black spots on leaves, stems and pods which enlarge, causing defoliation. Leaf spots often show a pattern of concentric rings. The fungus can survive between growing seasons in plant debris and disperses through the air or with rain splashes. The conidia are club-shaped, dark brown, multi-celled and usually tapering to a beak. They are around 20-130 µm long and 10-20 µm wide.