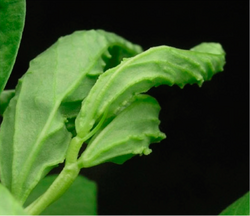 This virus is found in the Mediterranean and the Near East regions, as well as in Argentina. It causes severe disease symptoms on alfalfa (Medicago sativa), including stunting, leaf curling, crumpling, and shriveling. ALCV is transmitted by the aphid Aphis craccivora (Roumagnac et al., 2015). A genetic analysis suggested that the virus originated in the Near East and has subsequently spread to the western Mediterranean region and to South America (Davoodi et al., 2018).