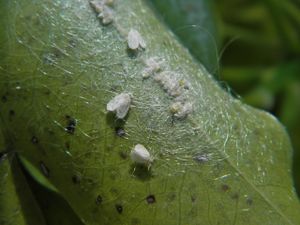 This whitefly is native to some parts of Central America (Belize, Mexico, Guatemala). It has been reported from Florida since 2009 and has caused outbreaks there on various ornamentals and crops, including the tree Bursera simaruba (gumbo limbo), coconut palms, avocado, mango and Strelitzia (bird of paradise). More recently, it has been been also reported from India (Sundararaj & Selvaraj, 2017).

A. rugioperculatus lays eggs in waxy spirals on the lower leaf surface, similar to some other Aleurodicus species. It is a comparatively large whitefly with adults reaching 2½ mm. The forewings have light brown bands.