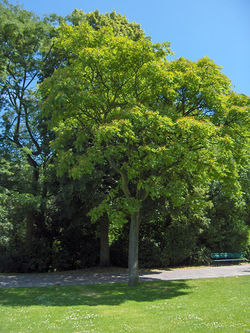 The tree is native in eastern Asia and has been introduced into Europe (e.g. into France in 1751) and North America (e.g. into Pennsylvania in 1784) where it has become a threat to ecosystems in temperate and subtropical regions. It can also invade fields. A. altissima is a shrub or medium sized tree growing to a height of up to 15-20 m which can form dense thickets and replace native species. Young trees are sensitive to frost. The wood is weak and not commercially useful. In China, the bark and leaves are used for the preparation of medicine.

Control is difficult because it resprouts quickly when cut, has a deep root system and produces many seeds. Uprooting of young plants is recommended before they establish a taproot. Usually a combination of cutting, uprooting and herbicides is needed to control the weed. Since around 2009, the fungus Verticillium nonalfalfae has been observed in several locations in the north-eastern U.S.A., causing wilting, defoliation and death of many A. altissima trees.

The compound leaves are usually 20-50 cm long and have 10-20 leaflets arranged opposite to each other with a terminal leaflet. The leaflets are ovate to lance-shaped and around 5-10 cm long. They have glands (one or more per leaflet) which have an unpleasant smell when crushed. There are male and female trees. The fruits are flat and wing-shaped containing one seed each. They become reddish brown when ripe.