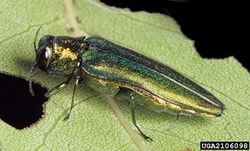 This beetle is a highly destructive pest of ash trees (genus Fraxinus). It is native to Asia including China, Korea, far-eastern Russia and Japan and has been recorded from eastern North America since 2002 and from European parts of Russia (Moscow area) since 2003 (Orlova-Bienkowskaja, 2014). In both regions the area of infestation is expanding, in North America at a rate of ~80 km per year and in Russia at an average rate of about 30 km per year (Valenta et al., 2017).

Although the beetle attacks mainly stressed trees in its native range, even healthy trees become infested in North America. The larvae are phloem feeders and effectively girdle the trunk resulting in tree mortality in as little as 2 years and stand mortality in as little as 5 years. More than half of the ash trees have been killed by the beetle in some locations in North America and estimates on the number of trees killed go into the hundreds of millions.

Eradication was initially attempted, but has been abandoned due to the difficulties in detecting infestations. Efforts are ongoing to limit the spread of the beetle and introduce more effective natural enemies. Several egg and larval parasitoids have been imported from China and released in the U.S.A. and Canada. Highly valued trees can be protected by systemic insecticides. In addition, sources of resistance have been identified in its native range.

The adults feed on leaves and are about 8-9 mm long. They have an elongated shape and are bright metallic green. The development goes through 4 larval stages and the whole life cycle takes between 1 and 2 years.