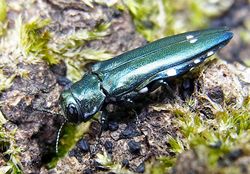 The beetle is found in Europe and northern Asia. It is considered to be a factor in oak decline and might also vector oak diseases. On the other hand, it is considered an endangered species in some countries. The larvae excavate galleries under the bark.