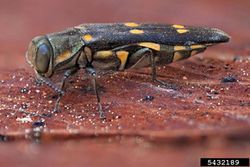 The beetle infests healthy oak trees in a limited area in California, U.S.A. since 2004. Following several years of infestations, it causes oak mortality, primarily on Quercus agrifolia and Quercus kelloggii, in that region. The beetle is suspected to have originated from Arizona where it actually only attacks declining oak trees. The adult feeds on oak foliage. The larvae bore into the trunks of oak trees and feed just under the bark. It has been estimated that about 25,000 oak trees have been killed by the beetle in California between 2004 and 2013.

Most larvae seem to complete their development within one year. Different sanitation methods, to control the pest and prevent spread of the beetle to other areas, have been tested, see Jones et al., 2013.

Since the adult can only fly a few hundred metres within a day, long distance dispersal through infested wood (e.g. firewood) appears to pose the greatest risk for further spread of the pest. Classical biological control is considered to be the best long-term option. The adults are about 10 mm long, dark greenish brown with 6 yellow spots on the elytra.