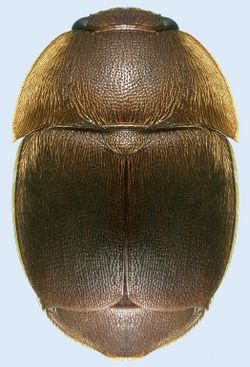 The beetle is apparently of southern African origin and has spread to North America (first record in 1996 from South Carolina), where it became a serious pest of honey bees. It subsequently spread to most parts of North America, Hawaii (2010) and to many parts of Central America. Parts of the Mediterranean region have been invaded, starting in 2000 (Egypt and southern Italy). Infestations in Portugal were apparently eradicated. In Australia it has been first recorded in 2002 from New South Wales and has spread to several oher states. In Asia it has been reported from the Philippines (2014) and South Korea (2018).

High infestation rates by the beetle will cause the honey bee colony to collapse. The bees also might abandon attacked hives. Further, due to the yeast Kodamaea ohmeri the honey from infested hives ferments. This yeast is carried by the beetle and improves the nutritous value of the honey to the larvae of the hive beetle.

The beetle lays its eggs into corners and cracks of a bee hive and the larvae and adults feed on honey and pollen. The larvae also attack the brood and tunnel through the honeycombs. The mature larvae leave the hive and pupate in the soil. The development from egg to mature adult last around 4-6 weeks and there are 4-5 generations per year. The adults overwinter together with the honey bees. They are good fliers and readily move between adjacent hives. They can even join honey bee swarms.

Traps are available to monitor hive beetles and several control practices are used. These include maintaining strong colonies with good bee keeping practices, treating the soil around the hives with insecticides and placing hive in areas with dry soil. Dry soil will lengthen the development of the pupae and increase their mortality.

The adult is 5-6 mm long (about one third the length of a honey bee worker), dark brown, with a broad head and pronotum. The antennae have a characteristic, 3-segmented club and the elytra do not cover the abdomen completely.