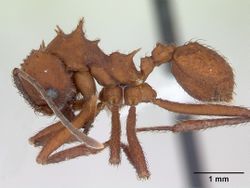 This species of leaf-cutting ant is found in South America. It builds underground nests and collects leaves from crops and broad-leaved trees. It is regarded as a pest of crops like cotton, beans, cassava or maize and can also cause damage to eucalypt plantations. Like in other species of Acromyrmex, the collected leaves are used to cultivate fungus gardens, which then serve as food for the ants. The colonies are monogynous, with a single reproductive queen.