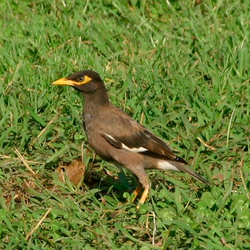 This species is native to Asia and invasive in Australia, the Mediterranean region, several Pacific islands and other countries. It is omnivorous, grows to about 25 cm in size and adapts readily to the human environment, being often found in urban areas. There it can reach densities of up to 200 birds per square kilometre. It is displacing native birds and is regarded as a threat to crops. On some islands, it punctures and preys on the eggs of sea birds (Hughes et al., 2017).