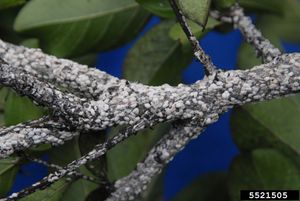 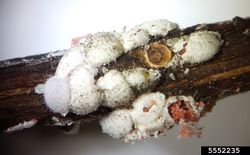 This felt scale is widely distributed in southern Asia and has been also recorded from parts of Europe. It was accidentally introduced into North America (first record in 2004 in Texas) where it has become a serious pest of ornamental crapemyrtle plants (Lagerstroemia indica). The scale colonises the bark of the trunk and the branches. Heavy infestations result in dieback and stunting. In Asia, a number of other host plants have been recorded, including some crops like pomegranate or persimmon.

Females are around 2 mm long, they construct an ovisac of white filaments in which eggs are laid. Both females and the emerging nymphs are pink. The life cycle from egg to adult typically lasts 2-3 months and up to 4 generations per year have been recorded.