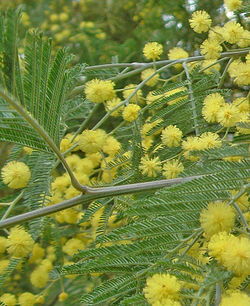 This plant is native to southeastern Australia and has spread to many countries in Asia, Europe, Africa and the Americas. For example, it was introduced into Chile, South America, as an ornamental as early as 1869. In Europe, it is regarded as one of the "100 worst" alien species (Nentwig et al., 2018). It is mainly associated with streams, roadsides and disturbed habitats, where it can form dense thickets, disrupt water flow, suppress native vegetation, and increase soil erosion.

In areas where it has established, A. dealbata creates a persistent seed bank that survives fire. The seeds spread through water, by animals or by human activities. For management, the prevention of further spread is given high priority, especially to areas with a suitable climate (Langdon et al., 2019).