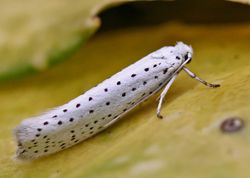 This family is widely distributed and contains more than 500 species of small or medium-sized moths. Several species are considered to be agricultural pests like the olive moth, Prays oleae, which attacks olives in the Mediterranean region, or the apple ermine moth, Yponomeuta malinella, which has been accidentally introduced into North America.

The larvae feed on leaves, bore into fruits or are leafminers. The often make webs for protection which can be conspicuous when larvae live gregariously. The adults have a wingspan of 10 to 30 mm and are often white or greyish. Many species have black spots on the forewings.