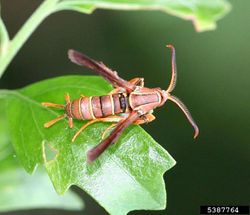 The larvae bore into the roots of grapevine in eastern North America and can cause substantial damage, resulting in reduced yield and sometimes in death of the vines. Infested vines might not show obvious symptoms until the infestation is advanced. The symptoms are described as "slow vine decline" with smaller discoloured leaves, stunting and reduced shoot growth. However, such symptoms can have various causes.

The adults live for only 1-2 weeks, do not feed and deposit their eggs on the soil surface. The young larvae burrow into the soil and bore into the grapevine roots. The larval development with 6 instars takes 2 (sometimes 3) years and the larvae create long feeding channels which can reach the trunk. The adults are about 20 mm long, resemble wasps and are brown with thin yellow bands on the abdomen.

Control has been difficult due to the lack of clear symptoms. It has been recommended to monitor the presence of pupal exuviae during certain times of the year and to apply soil drench insecticides (Rijal et al., 2014). In addition, keeping the areas under the vines clean, will expose the newly hatched larvae to predation and desiccation.